I adore cocktail parties and while I have hosted more at my home than most people, it’s not every day that I have an opportunity to entertain Hip-Hop royalty. Russell Simmons came to Dallas to launch his inaugural event, Dallas Rocks, which benefited his beloved charity, the Diamond Empowerment Fund (DEF). Russell founded DEF in 2007 with a mission to raise money to support education initiatives that empower economically disadvantaged people in Africa where diamonds are a natural resource.

Several months ago one of my board members asked me if The Fashionistas (my beloved non-profit organization) would be interested in partnering with Russell and the Dallas Rocks event. There wasn’t any money in it for us (as a rule, we only work on events that bring cash into our organization so that we an continue to run our educational programs), but because of the obvious star power involved, I agreed. Naturally I saw an opportunity for a great party and offered to host the pre-gala event at my home. Together with the DEF people, we put together (by Dallas standards) a star-studded guest list – most of whom said they were going to attend. Things were coming together nicely until 6:00 am the morning of the event when I realized that the person in charge of arranging for the caterers had dropped the ball. You don’t know me, but believe me, all hell broke loose. By 10:00 we still didn’t have anyone and I was starting to have a complete melt-down. Fortunately, the little oversight was resolved and caterers arrived promptly at 4:30 to set up. The house looked beautiful, full of flowers and candles and one of the highlights of the evening was getting to wear these incredible Cartier diamond ear rings, which they graciously loaned me. (I am the Cartier ambassador for Dallas, so it’s my job to wear their jewelry!) My publicist arranged for every media person and town to cover the party, including a camera crew from NBC 5 who interviewed me for the evening news. This may sound really fun and glamorous, but, believe me, it was very stressful. I don’t hob-knob with celebrities and I am not a TV star by any stretch, so my stomach was churning. Anyway, Russell arrived around 7 and was immediately besieged by everyone. It was funny to watch people push their way into having their picture taken with him. He was very gracious and talked to everyone who came up to him. Other luminaries that made an appearance that evening were former Dallas Cowboy and Dancing with the Stars star, Emmitt Smith and his gorgeous wife Pat. She really is one of the most beautiful women in town and she’s an absolutely lovely person inside and out. Former two-time Super Bowl champion and Denver Bronco’s cornerback Ray Crockett was in the mix along with the usual assortment of Dallas socialites and social wannabes. The party was a tremendous success and created a huge buzz the next day around town and in the news. 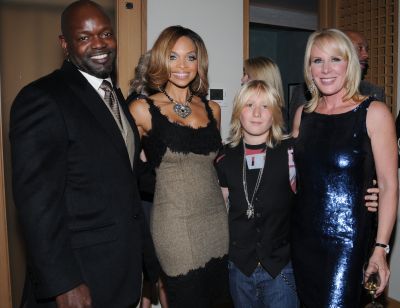